Back to Yellowstone River to the Mississippi River 2016 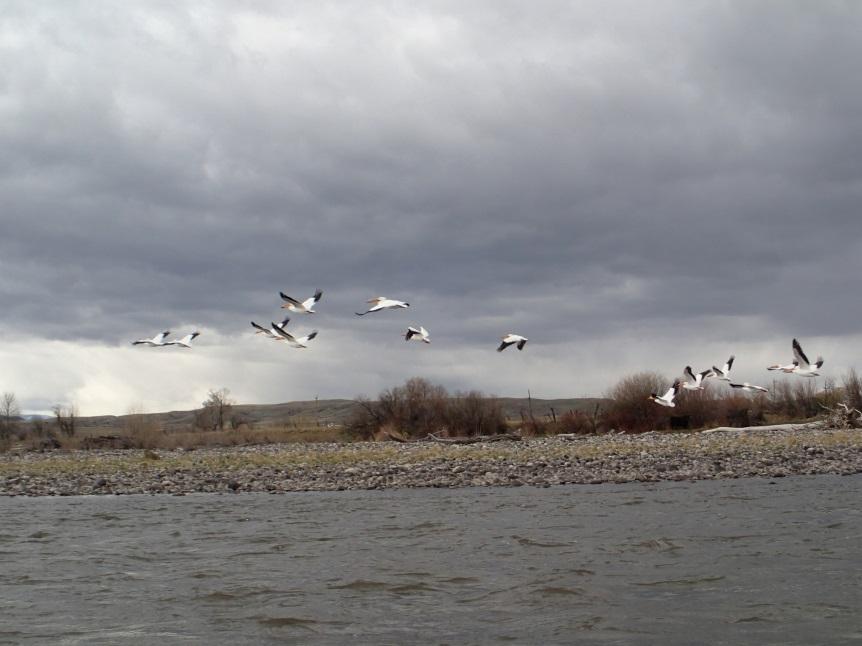 FRI APRIL 15-6TH DAY ON THE RIVER – Beautiful morning once again to start out on the river. Slept great last night, up once again just a little bit later, not cloud in the sky to begin with. It takes just what it takes for me to break camp down and get it ready to pack in and on top of the kayak. There are no short cuts, none so far as I can see.As the day progressed the wind came up to my back, down river and then it got cold and I stopped and put my rain gear on which really helps to keep me warm. I got wet, once again had to jump out of the kayak to get off of a shallow area and it was a little deeper than I thought. I am beginning to think that a pair of hip waders might be the way to go. There is no way I would ever get hung up where it would be deeper than above my knees, impossible unless it was on a rock in the middle of the river. With the hip waders I would never have wet/cold/damp feet.

About noon it got cloudy and has remained so the rest of the day. I made it to Billings, in fact probably about the middle of Billings, so tomorrow obviously I am on the other side of Billings. I am being told and read that there is a diversion dam at Huntley which is about 20 miles downriver. I will be careful and make sure I stop and take a good look. It might be a portage, or line the kayak or just go thru it, but won’t compromise any safety concerns. 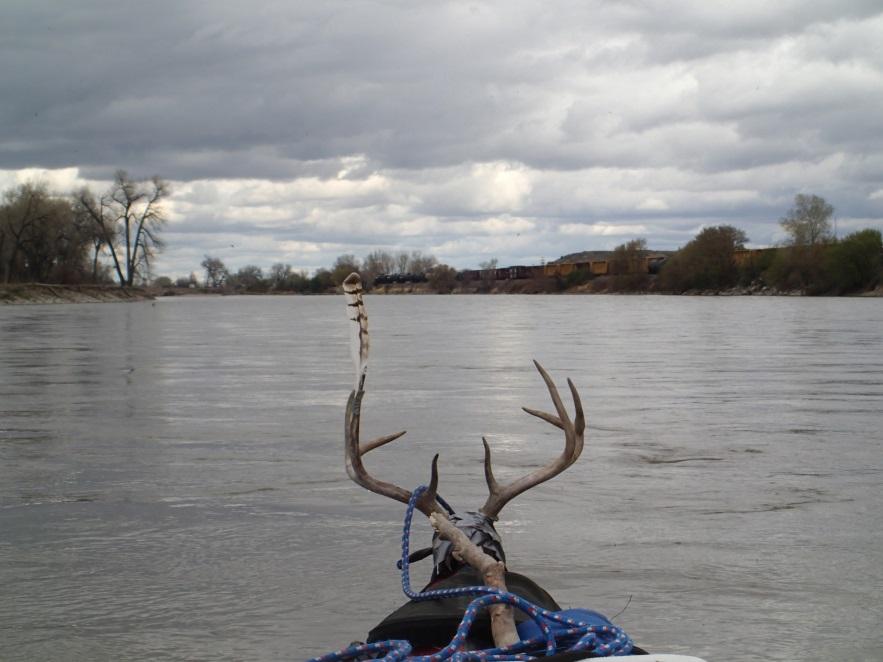 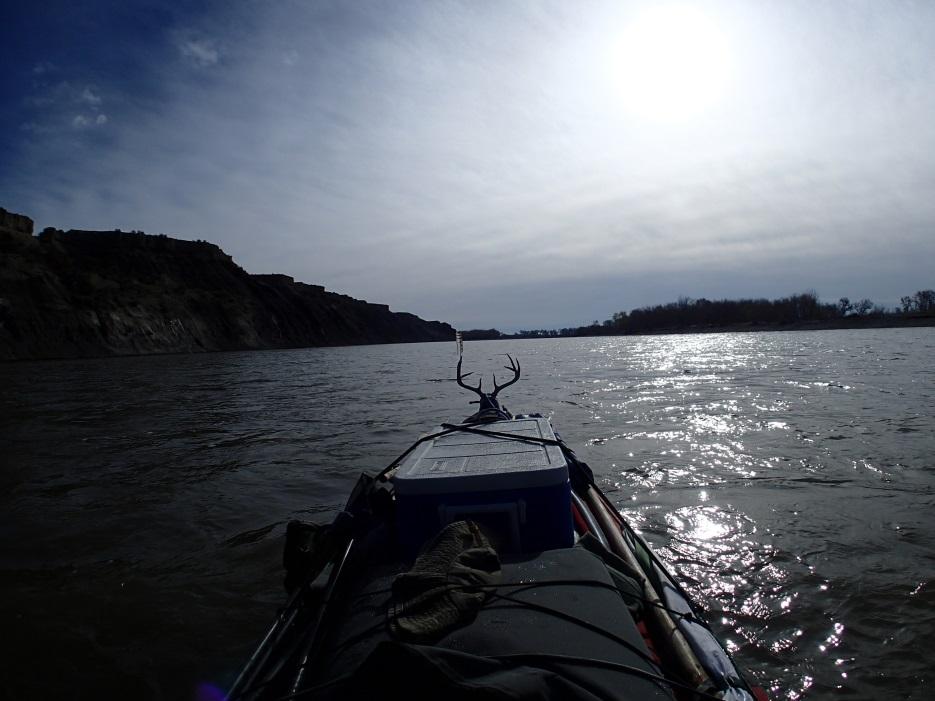 The Writer for The Outlaw Magazine out of Bozeman has called me and left a message. Looks like they are going to be doing a story/article for next spring on my trip. Cam is good friends with Brian Ladd whose brother Eric owns the magazine. It will be fun and hopefully will give me a platform to launch the selling of my book I hope to finish on this trip.

Some dogs are barking behind the tree line, I hope I haven’t camped/stopped next to the dog pound. There is some of the freeway noise going thru Billings but that is to be expected. Don’t have it all the time, but it is fairly persistent throughout the day most of the time.

I sure don’t see anybody on the river. I did see a guy using some equipment looking for Gold. Two guys working on water pump getting ready for the irrigation season. That’s it. You would think such a beautiful resource like this would get more use, but I have for years been committing that I just don’t see people on the river. Evidently they are all on the freeway going 80 MPH.

Eating good and sleeping good and maintaining vigilance on the safety aspect of the trip and I would have to once again comment that with this being the 6th day on the river, things are going very well and I am probably covering a good 30 to 40% more river miles a day than I expected to. I believe that is a combination of good current, wind to my back some of the time, being in good shape which allows me to paddle more often than not, using the umbrella when it is appropriate and the kayak is sleek and fast, regardless of the weight it is carrying. 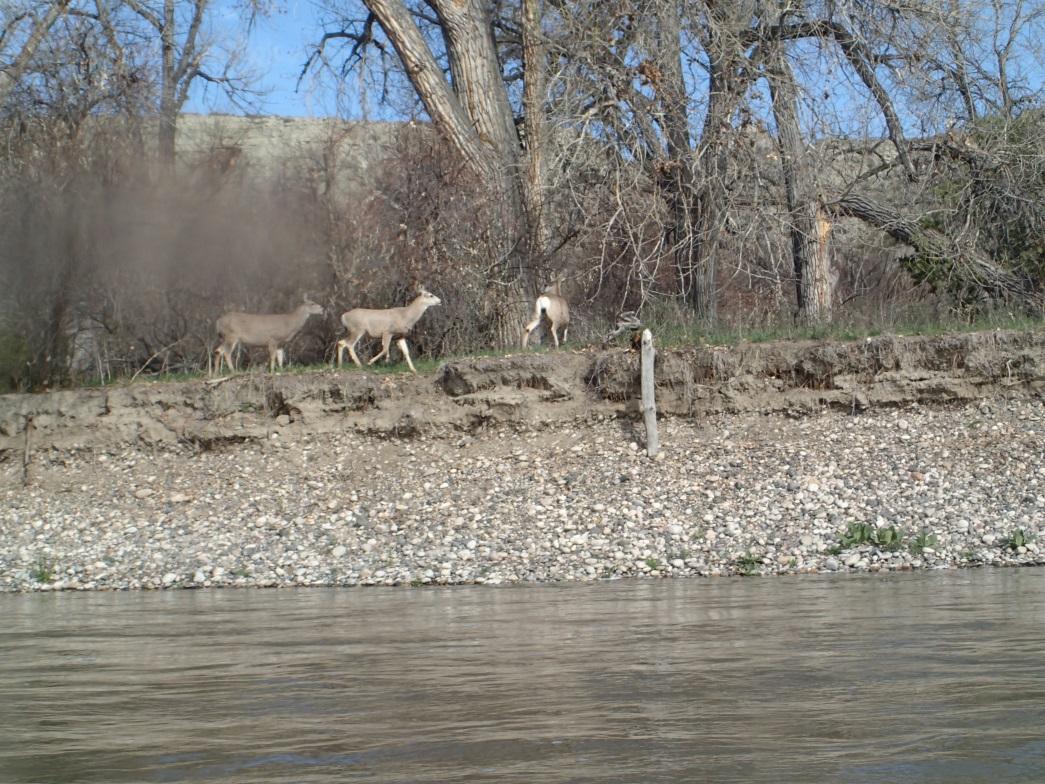 APRIL 16 SAT DAY 7 ON THE WATER – What a great day all the way around. I woke up a little earlier, couldn’t tell what time it was because it was cloudy and raining a little bit. Got camp broke down, kayak packed up and ate a half of banana and had a hot cup of tea. I just wasn’t hungry. Probably had something to do with the dozen cookies I ate sometime between 10 and 2 last night.

It didn’t take me long to get thru the rest of Billings and cross under the I-90 Freeway Bridge. I spotted a Little Lil’s casino and truck stop so I pulled over; tied up and walked up to charge the phone which was dead. Got a hot cup of tea and decided to get something to eat in Arby’s. Arby’s isn’t my favorite place but settled on a chicken sandwich. While I was waiting for the order, a nice guy at the drink coolers in the C Store started talking to me and I told him what I was doing. Then I asked him how far Cabela’s was because I wanted to get some new socks, a map and a pair of waders. 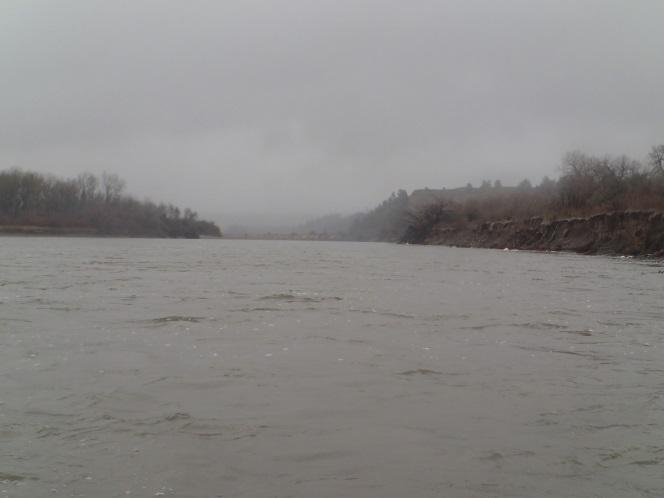 He said he would take me and bring me back. Once again baffled on how well things are working out. I wanted the waders because the river boots only come up to half calf, they have no heels or arch support and I am constantly getting my feet wet and uncomfortable all day long. So that worked out perfectly.

Once back on the water, it finally started to clear up and absolutely no wind, not even a breeze. It was only a matter of another couple of hours and I got to the first of what I think are two diversion dams, this one being the Huntley Diversion Dam. I looked at the dam from both sides of the river. No way was I going to go over this, nor did I want to have to portage and then carry the kayak around. 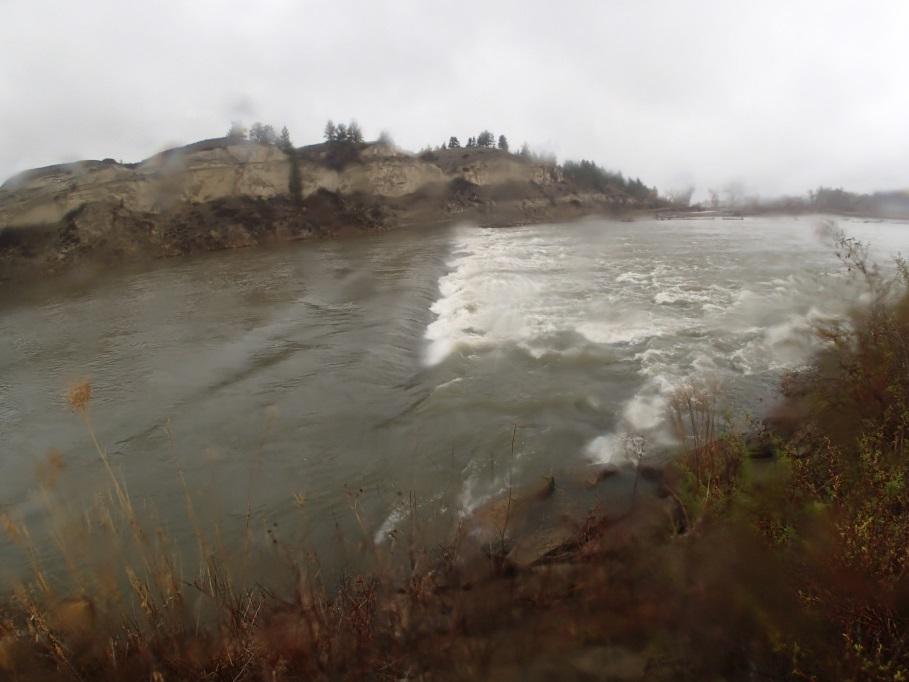 So I went river left, tied up on an island and walked the circumference of the entire island and surmised that I could get around the dam without portaging by going river left and that is what I did. 10 minutes later I was in the main channel again.

The rest of the paddle for the day was just gorgeous. Sometime during the afternoon I suddenly realized something was different. It was eerily quiet. I mean dead quiet, except for the sound of the river and the birds. It was two things. First I was away from I-90 and the railroad. Second, there were no geese. The geese have been prolific since getting on the water. Thousands of them squawking, fighting and carrying on day and night. Of course they are getting ready to nest and are starting to do so. No geese. It was like somebody drew of line across the river and said no geese down the river from here on. Silence. It was almost sacrilegious for me to dip my paddle in the water and make a sound that didn’t belong. 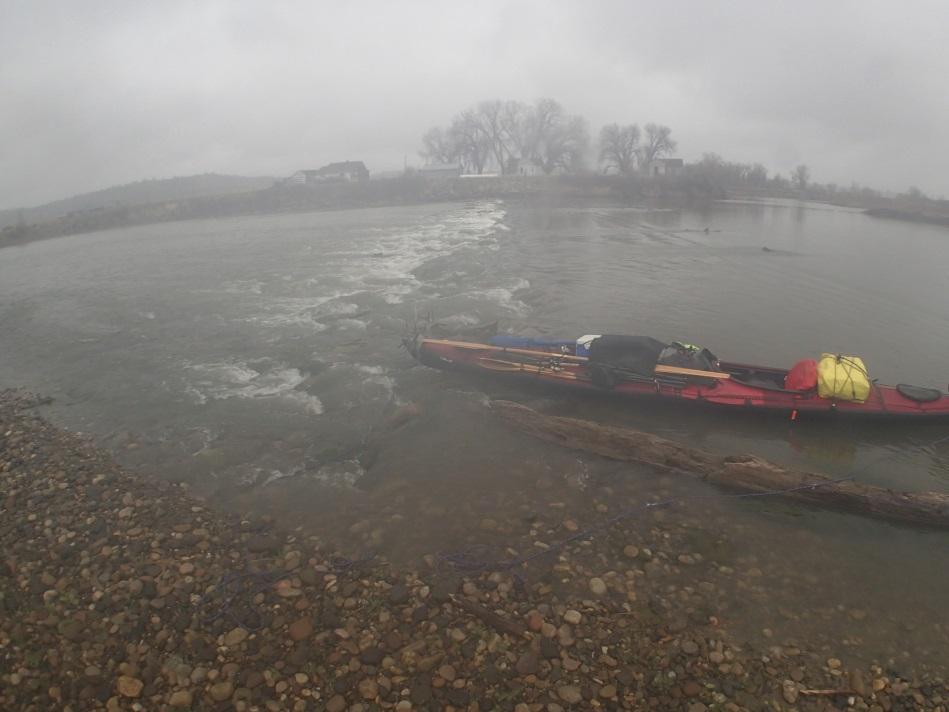 I have seen a few people fishing today and two boats. That’s it. Of course it is Saturday so there are a few people out on the water.

I also stopped at Pompey’s Pillar where Lewis engraved his name in the Sand Stone. It is the only visible remains of anything left on Lewis and Clark’s trip over 200 years ago.

Once again I have found a good camp spot up off the bank in case the wind comes up. Weather says it is supposed to rain, but sure doesn’t look like it, but I am always prepared.

I think I am going to put together another “mail a box back to Cam’s”. I have too many clothes and too much incidental stuff.

So far so good I am making incredible time. It also looks like the river is smoothing out, probably won’t be as much current, we shall see.