Back to Yellowstone River to the Mississippi River 2016

APR 13 WENS – (DAY 4 ON THE WATER) I went to the ranch house where I had tied up my kayak, after I got back from town and the folks let me stay there on their property. I appreciated it, because it was late and I was very tired from going into town and coming back, plus the 3rd day in a row of nothing but 75 degree weather plus and all the sun right off the get go. 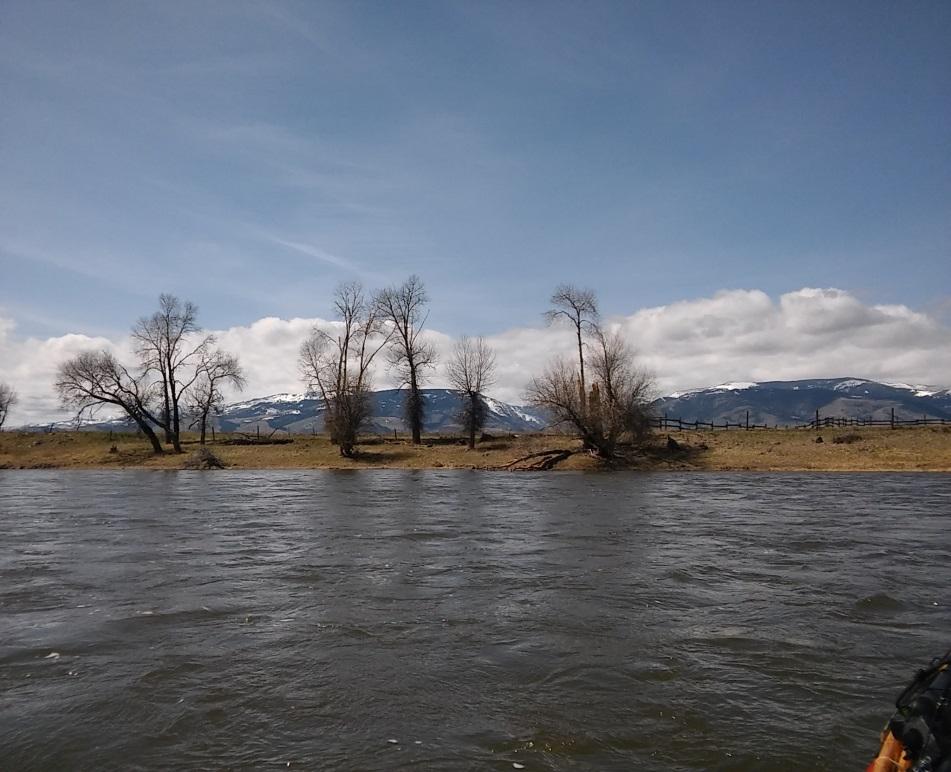 I didn’t eat much last night. I was going to stop at the Frosty Freeze but I was weighted down with ice/water/and some food and was struggling. Fortunately 2 different rides stopped at the same time and one of them gave me a ride back to where I was tied up, wasn’t far but it really helped.

What a beautiful sunrise/morning. Up once again before the sun came up and it took about an hour to pack things up which appears that is going to be the norm. I had English muffins with gravy, a banana and orange juice.

I went down river just a ways and tied up again, walked into town and got a few more things, some money out of the bank and a tea mug. I had forgotten to put one in the gear. I stopped at a bakery and got a tea and two blackberry scones. They had to be the best I have ever tasted, almost went back and got a couple more to take with me.

I have just spent 7 hours in the kayak today… from 9 to 4, which is a long time. I did stop once to put my rain gear on because the weather is changing for the next couple of days. I have managed to figure out how to take a pee in the boat which helps, because it is not that easy to get in and out of the boat at this stage of the age. About 11 the wind came up and blew some rain in and it blew all day long to my back. It has stopped for now, but it is also raining which from the looks of the weather is going to be case for the next couple of days. I am prepared for it both in the kayak and on the bank.

One of the first things I do once I have the camp set up is to get any water that is in the kayak out utilizing a towel and then put the covers on the copings/seats and the two front and back small openings.

It is hoped that since the river is close to I-90 the traffic noise is somewhat subdued, don’t think that is going to be the case tonight. I just couldn’t go any further. Problem is, it never subsides on this Freeway, and it is 24 hours a day, 80 MPH, no let up. 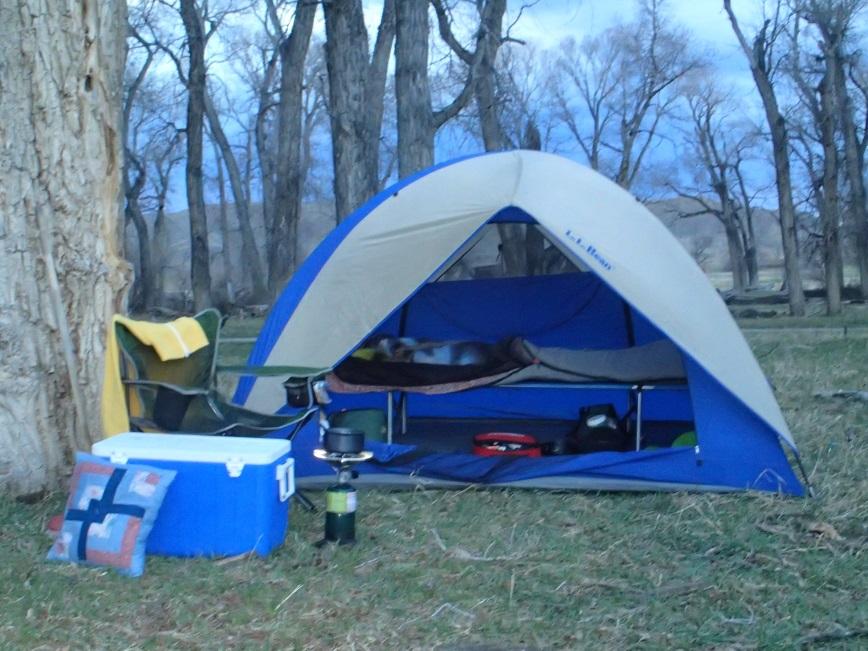 I am not speculating at all, but I have paddled a lot of miles for 4 days. If the current stays as it is or close to it and I have another day of the wind behind me, I am thinking I might be on the other side of Billings in 3 days plus or minus.

There was one time today I picked river right when it should have been left and got hung up in the middle of the river, but got out and pushed it down to deeper water and got back in. Probably a little like getting in a bobsled as it is moving.

It is never any problem to find a good camp site, there are so many of them. I try to pick a spot where it isn’t too difficult to pack things up the bank into the trees/bushes so I am out of the wind. There are some additional benefits also, normally soft, a million years of leaves and grass. Plus the birds roost in the trees so about a half an hour before dark they are singing and then when I wake up they are singing to begin their day. Can’t think of a better way to end a day or start one. Has to be a lesson for all of us in that.

No question after a good dinner I will sleep very well. 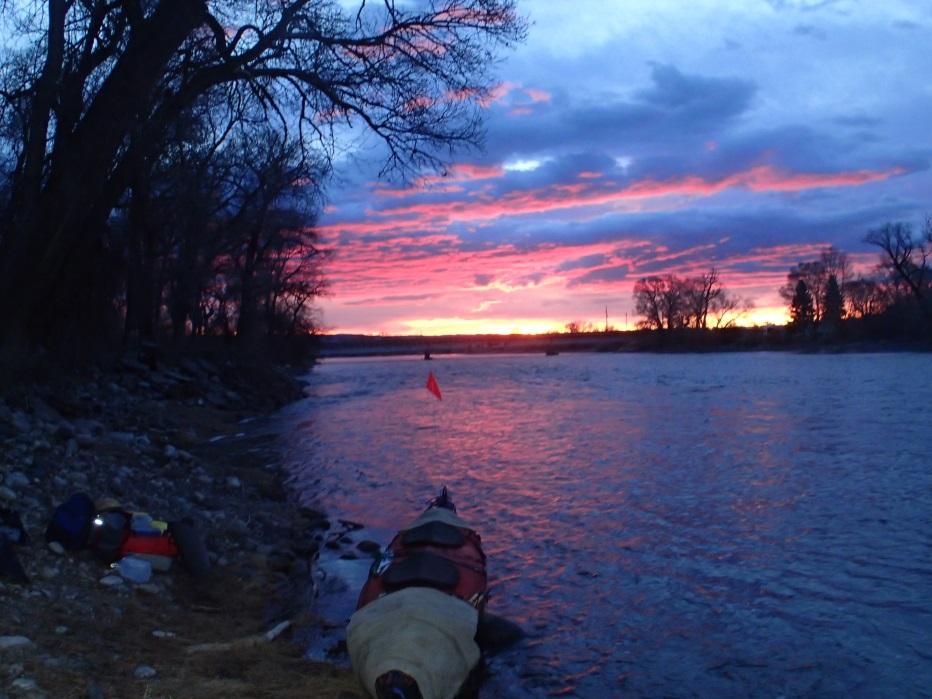 DAY 9 THUR APRIL 14- 5th Day on the River- Day started out great, a little later than normal. I am getting better at packing the kayak. With mailing what little bit of stuff I did back to Cam’s place from Big Timber and eating food every day it is slowing getting more manageable.

I normally check the camp area for anything left once I have loaded the kayak. I also try to go for a little walk before getting in the kayak and taking off, just think, call it meditation if you want, but it gives me a time to reflect and prepare.

I got a mile down the river and suddenly realized that I had left my good gloves, ear band and my face mask which I had worn the day before and was prepared again this morning for colder weather and rain than it was. In fact for a couple of hours first thing this morning it was sunny and very mild. I pulled over and had to walk up and over a pretty good ridge on a game trail to get back to where I had camped. It was a good walk. I walked a lot going into Big Timber but it was nice to get out and walk in the woods.

Once back on the river, I got hung up one time, river right again, rather than river left. I got to Columbus about noon, tied up and walked to the IGA Store got some more water, ice, a banana, box of cheez-its and two cokes. After stocking up in Big Timber I didn’t need much.

Back in the water I misjudged again and actually got sucked into an overhanging tree, the back end of the kayak got hung up on the rope I have looped in the handle and it was one hell of a chore to get unhooked. I was not happy. Wasn’t worried because it wasn’t deep but the water was moving fast and it is cold. Plus I hate to admit it I haven’t been wearing my life jacket, but I am going to start tomorrow for a while until I get out of the currents and mild rapids. 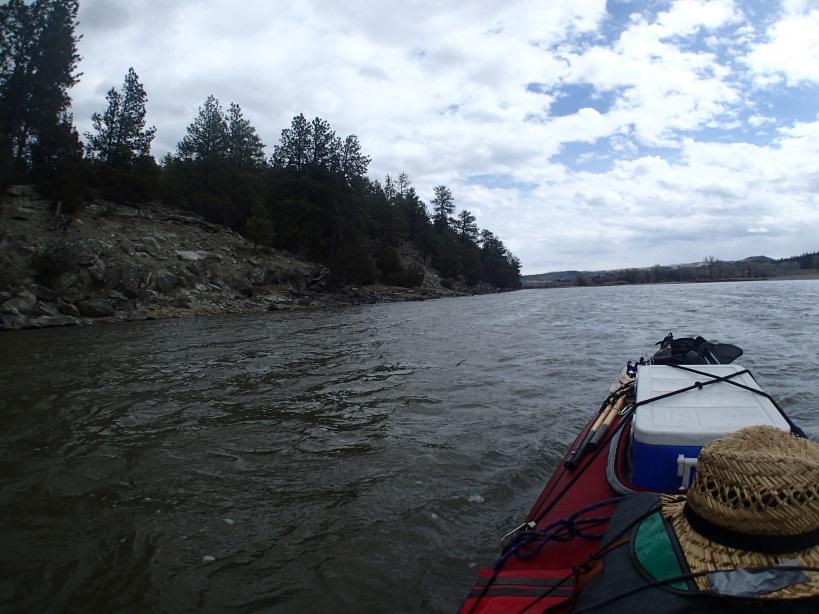 Then I got hung up again right after the tree snag, so I said that’s it, I am off the river. It was raining mildly, little wind but very nice.

I am at a great spot, fish jumping, eagles flying, crows squawking and birds singing. I have built a fire to get things dried out and just relax. I don’t build fires often, I don’t like everything smelling like smoke, but the tent is back up off the bank in the trees and the fire is on the bank, just unbelievably peaceful and tranquil.

My plan is to cook a pot of chili tonight, I brought some containers to put it in and it will be enough for several meals.